Dakota Livesay, the publisher of Chronicle of the Old West newspaper and the host of the nation’s number one and number two syndicated radio shows dedicated to the history of our American West, was always intrigued with the difference between “reel” cowboys and “real” cowboys. Dakota wanted to find a unique way to educate and entertain people about what really happened in the west of the late 1800’s, so in 2000, Chronicle of the Old West was born.

With the success of the newspaper, Dakota was asked to tell stories about the history of the American West as a segment of a nationally syndicated radio show. Dubbed “The Radio Voice of the Old West” Dakota has won the coveted National Day of the Cowboy, Cowboy Keeper Award, and the Spirit of the Old West Alive Award. 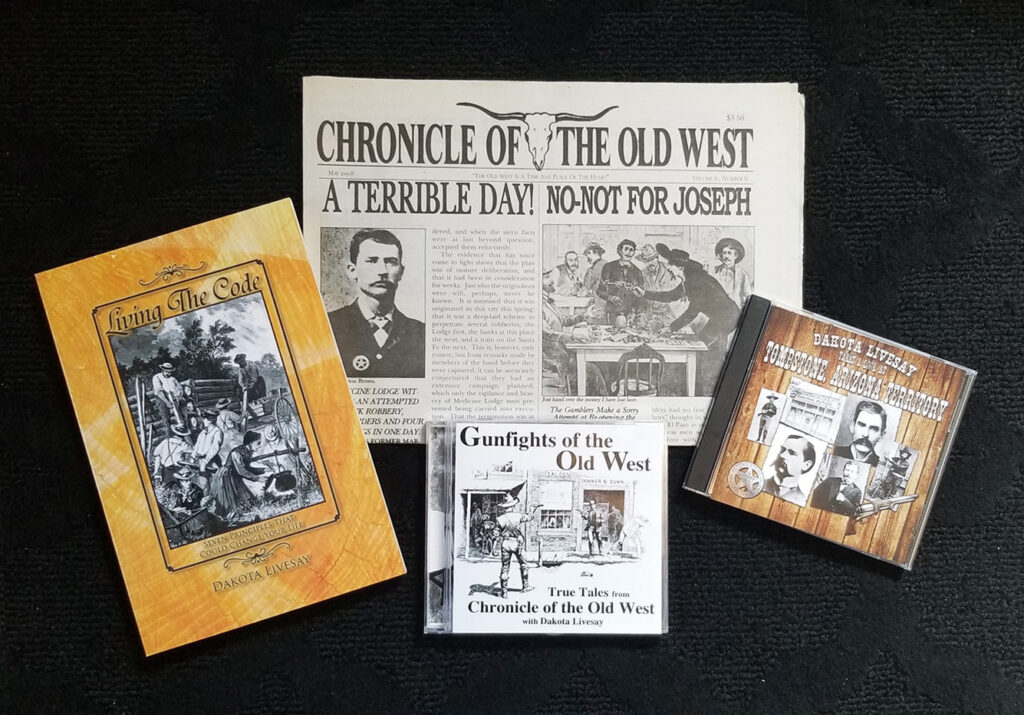 Now, Cowboy Luggage has made available three of Dakota’s creations in one value-priced bundle: His book “Living the Code”, his “Tombstone, AZ” CD and a back issue of Chronicle of the Old West, a $50 value for $22, with Free Shipping to the Continental US (while supplies last). Here’s more about this Old West Bundle:

The Book:
For six years, through the Chronicle of the Old West and his radio shows, Dakota Livesay has promoted seven precepts developed on America’s frontier. He calls them “The Code.”
He’s now written “Living the Code”, explaining how we can make these precepts a part of our lives. If taken seriously, these precepts can change a person’s life.
Dakota says, “I believe we can all agree that by each of us living by ‘The Code’, and inspiring others to do so, would not only change our lives individually, it would make major changes throughout the country and maybe even the world.”

The CDs:
Dakota states, “If you enjoy the Old West you’ll love these CDs comprised of stories about the people and events that helped shape Tombstone, Arizona Territory into the last great Old West boomtown on the continental United States, and of the most infamous gunfights of the Wild West.”

The Newspaper:
From Dakota, “Chronicle of the Old West is a 20-page newspaper that contains articles from actual 1800s publications and currently written articles, written as if the event has just happened. You would swear it was found in your great grandfather’s old trunk.”